Dustbowl (Training) is a map designed to familiarize new players to the concepts of Attack/Defend gameplay. Valve initially released this map training mode with the Mac Update. Its purpose was to provide an environment that new players could practice in without the confusion and difficulty curve of some public servers.

In Training Mode, the player experiences normal game situations, but competes with and against bots instead of human players. The bots are set by default to a relatively low difficulty level, as they often move in straight lines and stand still while they shoot. They will not capture a point until the player begins to do so; if the player is away from the point they will simply repeat the "Go! Go! Go!" voice command until the player stands on the point. They will not use their melee weapons if they run out of ammo. 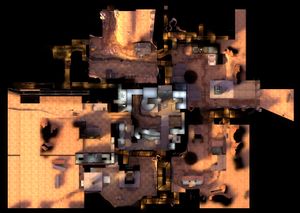 Overview of the map.

The first round introduces the player to the basic mechanics of gameplay, specifically the capturing of control points. The round is also intended for the player to apply the skills learned in Target.

The teams change as a player captures the control points.

This round introduces the Medic and explains the basics of his abilities. The Medic on the player's team will focus almost entirely on healing the player throughout the match.

The teams do not change during Round 2.

Round 3 introduces the Engineer and demonstrates the functions of his buildings. Initially, the player and the friendly Engineer are the only characters present. Once the player joins the Engineer above BLU's spawn area, RED bots are spawned to show the abilities of the Sentry Gun. The player is then taught how to deal with an enemy Sentry Gun, which guards the first point. The game then progresses as normal. Capturing the final control point wins the game and completes Soldier Training.

All control points have the same capture times.