This article is about Community Mercenary Park strategy.

Note: It is recommended to read the main Mercenary Park article first to become familiar with the names of key map locations used in this article. 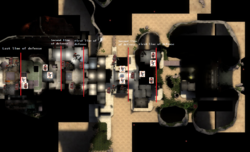 Note: It is important to understand what do the buildings with a white background and an orange circle represent. This overview is structured in such a way that it only shows the ground floor of the map, if there are any second floors or otherwise elevated platforms they will now be show, instead the ground below these second floors will be shown. For that reason orange circles and a white background has been added to some buildings. The orange circle is supposed to represent that the building is positioned on some sort of a second floor or an elevated platform which isn't show on the overview. So just keep in mind, when you see a building which has an orange circle, remember that that building isn't positioned on the floor it is actually shown on the map, but that there is a another floor above that floor which is that buildings actual placement. For example, on first point you can see two orange circled Sentry Guns positioned right next to the point. These Sentry Guns aren't actually right next to the control point but are actually positioned on a catwalk which isn't show here but is still running above and alongside the point. 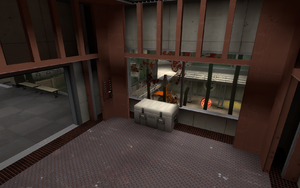 The hole in the glass.