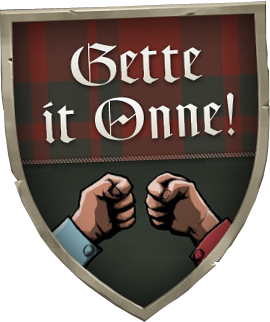 This article is about Community Medieval Mode strategy.

As only certain weapons are allowed in Medieval Mode, class balance is drastically altered from normal gameplay.

Note on Banners: The Rage meter fills by dealing damage. Though you have a high pool of health, you will likely come off damaged in a fight. You must have a source of healing to deal extensive damage. After all, you must be alive to sound the bugle. The halo effect surrounding your teammates's feet can be used for Spy checking, as enemy Spies will not receive the halo effect.

Note on shields: Demomen can use the rocks and other features of scenery to quickly ramp up over walls and other obstacles. Any weapon that cannot deal random critical hits, such as the Eyelander, will be granted a critical swing near the end of the charge. Use this to your advantage. Additionally, if aimed correctly, you can still pop people into the air with the shield bash, rendering them helpless and with low health: easy prey for your melee weapon.

As the Shotguns are unusable, always make sure to equip a lunchbox item:

Note on lunch box items: Remember the only way to activate their effects is by standing still and nomming on it. Position yourself against a wall or a protected spot before a battle to avoid having your lunch break interrupted.

Note on anti-Spy strategy: Since the Spy's greatest strength is his Melee weapon and players behave very differently in this melee-only mode, a good Spy can be an extremely difficult opponent to take down. The following are some tips to counteract this:

Special Note: Most knives (except for the Spy-cicle and the Sharp Dresser) will allow you to perform the deadly Fencing taunt. You can use this on unaware opponents, but remember to watch out for enemies (especially Spies) before doing so.

Note on watches: Since few weapons in this mode use ammo, you can fill your Cloak relatively quickly (except with the Cloak and Dagger) with dropped weapons or ammo boxes. Remember that although Spy-checking is limited, you are still susceptible to Mad Milk, fire from flaming Huntsman arrows and the Pyro's Sharpened Volcano Fragment, bleeding, or merely bumping into someone. All of these will short out your Cloak, rendering you slightly visible to everyone.