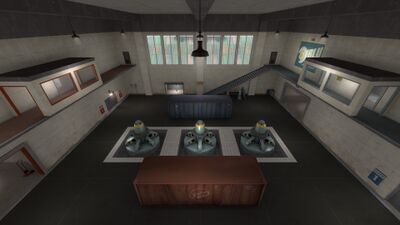 This article is about Community Capture the Flag strategy.

The Scout’s speed and maneuverability make him an obvious choice for Intelligence stealer and carrier. Using Bonk! Atomic Punch, the Force-A-Nature, and the Sandman is a great combination for an Intelligence-grabber Scout, since it maximizes his ability to breach and bypass enemy defenses, utilize alternate routes, and make a successful getaway by stunning or knocking away anyone who tries to stop him. Aside from attacking the enemy Intelligence, the Scout can also be useful for harassing enemy Snipers, being a general distraction with Bonk!, and also by being a sort of “midfielder”, playing both on offense and defense as the need arises.

As a strong all around general combatant, the Soldier can play any role in CTF. The ability to Rocket jump and the speed boost of the Escape Plan can make the Soldier effective at taking alternate and unexpected routes to the enemy Intelligence room, and he is one of the few classes capable of single-handedly dealing with enemy Engineers or other defenses that might be protecting the Intelligence. On defense, the splash damage of the rockets are great for disrupting the movement of enemy Intelligence carriers making it a good all-rounder class in CTF.

The Pyro shines on defense in CTF, keeping the area around the Intelligence Spy-free. As in any match, the Pyro is also an excellent guard for Engineer positions, blunting attacks and disrupting enemy ÜberCharges and sap attempts. The compression blast is a vital tool for preventing the Intelligence from being picked up, and can also be used to prevent or reverse the movement of Intelligence carriers. When it comes to defending dropped Intelligence, a Pyro on the scene is a must.

Aside from his normal role of dealing massive damage and wrecking enemy Sentry Guns, the Demoman has a lot of other options in CTF. The long and often defensive nature of rounds can really reward the use of the Eyelander to build up a massive bonus in speed and health. The Scottish Resistance is great on defense to seal off multiple access points to the base and the Intelligence, and also on offense to diffuse similar traps from enemy Demomen. Sticky traps on dropped Intelligence can stop a single capture attempt instantly, but aren’t always the best for preventing the Intelligence from being touched in the first place. Beware of enemy Bonk! Scouts and Dead Ringer using Spies causing you to trigger your traps prematurely.

While the middle of many CTF maps are often a no-man’s land for the Heavy due to Sniper cover, the team bases are usually much more claustrophobic and a talented Heavy supported by a Medic can become an almost unstoppable force in these locations. Heavies are excellent for spearheading an assault to capture an Intelligence briefcase that has been partially brought out of a base by another, faster teammate, since going all the way to the enemy Intelligence room takes a long time both going in and coming out and requires plowing through a lot of resistance. Always defer to a teammate in picking up the Intelligence unless you are the only choice. On defense, the Heavy can be quite an effective Spy-checker and can use his high health to block doorways or other routes to prevent the escape or entrance of enemies going after the Intelligence. The Natascha is great for slowing down Intelligence carriers and making them easier targets.

The Engineer provides a vital first line of defense against the easiest offensive tactic in CTF – the Scout. Even modestly well-placed Sentry Guns can completely deny Scout capture attempts, and unlike human players Sentry Guns never get bored of waiting for enemies. Boredom however can be common for Engineers on CTF maps, especially during stretches where the enemy team might not be trying particularly hard to capture your Intelligence. This can be the biggest pitfall of CTF for Engineers however, since often your team assumes that you have the Intelligence under guard, and if you fail to be vigilant, there is actually very little standing in the way of the first person who finally decides to steal your Intelligence. While many players try to relieve their Engineer boredom by building bases in forward locations or even in the enemy base, the wisest course is to build near your own Intelligence. CTF maps are usually never big enough to really require a Teleporter to ferry your team, and Teleporters can actually be detrimental if they divert your team away from your base. The Sentry Gun is usually best placed within range of your Intelligence, otherwise Bonk! Scouts can bypass it, though if there are other Engineers on your team you can gain more freedom to build in other areas of your territory. Never build a Sentry right on top of your Intelligence, since Spies can sap it and start escaping with the Intelligence without being shot down. Staying close to home has the advantage of being near a Resupply Locker, and you can even retreat there carrying a Building during moments of extreme danger and rebuild once the coast is clear. While an Engineer base can protect the Intelligence from many threats and most single enemies, call for help if it looks like you’re being seriously attacked. Medics or Spies accompanying other classes can overrun you very fast, so fight for time while calling for help. On many maps it is possible to use your Sentry and Dispenser to block access through doorways and hallways. Finally, always remember to move or rebuild your Buildings where your Intelligence has dropped. A Dispenser as well as a Sentry is important to allow your teammates to keep defending the Intelligence without having to leave to refill on ammo.

Many players know how vital Medics are for sustaining any kind of offense in enemy territory. Not everyone realizes that they are equally important for maintaining their team’s defenses in their own territory as well. Aside from being near Resupply Lockers and perhaps friendly Engineers and their Dispensers, there is no real advantage to fighting in your own territory compared to fighting in enemy territory when you're face-to-face with an enemy attack. Without Medics to provide immediate healing and overhealing buffs, the enemy team can easily overpower your team’s defenders for just long enough to steal and get away with the Intelligence. Simply because you get to respawn when you die doesn’t help defend in a critical situation, and preventing his teammates from dying is just what the good Doctor ordered. When playing as a Medic, it’s fairly easy to remain alive to build up an ÜberCharge if you don’t leave your team’s territory, though if you aren’t healing wounded teammates this will be a slow process. Things get a lot trickier if you plan to deploy an ÜberCharge in the enemy base. In most cases, enemy Snipers and Spies are your main worries, particularly if you cross the middle of the map. Depending on the situation, you should avoid Sniper territory entirely and try to take alternate routes to the enemy side such as through sewer tunnels. Once inside enemy territory, the ÜberCharge should ideally be used to break through Engineer positions to reach the Intelligence.

“Go to the Sniper deck and shoot every head you see” can sum up how most people play Sniper in CTF. While doing this certainly helps your team, it’s important not to get so single-minded that you forget to do other things, such as defending your Intelligence. Bad Snipers will often forget that they have a responsibility to listen to Intelligence alerts just like everyone else. Since you, as a Sniper, are usually on your side of the map, you should always be available to lend a hand to stop an enemy Intelligence carrier, and know a quick response to situations. Generally, being scoped, you are not very wary of your close surroundings. This makes you a great target for Spies and other mobile classes. Jarate is an excellent counter to Dead Ringer-using Spies who can often be incredibly difficult to stop from grabbing the Intelligence, and the Huntsman can come in very handy for dealing with Heavies that reach your base. Finally, many players do not expect Snipers to be anywhere but Sniper decks (battlements), but you can easily pick off more vital targets if you choose a different spot to camp, such as the sewers in 2Fort.

There is a lot of room for creativity and deviousness for the Spy in CTF. In contrast to the time pressure of some game types such as Arena, CTF rounds can often be long enough to allow the Spy some time to get into great positions to cause all kinds of mischief. Using the Cloak and Dagger, the entire enemy base can become your chestnut, allowing you to infiltrate practically any location with enough time and patience, completely unbeknownst to your enemies. However, this can depend a lot on the enemy team’s level of skill and vigilance. If you get sloppy and get exposed and killed several times, you might find that no amount of patience gets you anywhere once several Pyros start sweeping everywhere. Random Spy-checking happens all the time, so never assume that you can hide in a location that is completely safe from discovery. Once you successfully infiltrate enemy territory, the real fun begins. You can relay information on enemy defenses to your allies, including the location of enemy Sentry Guns and Stickybomb traps. Skilled Spies can guide their team’s Scouts to the enemy Intelligence, sap Sentry Guns to allow them to grab it, and then help complete the capture on the way out if the Scout is killed. Spies are also excellent at resetting the Intelligence timer since they can reach it invisibly or from behind and uncloak right on it. The Dead Ringer is an especially useful tool for this purpose since it enables you to approach the enemy without fear of being immediately killed. Aside from causing havoc in the enemy base, Spies can also be excellent defenders by posing a serious threat to enemy Heavies and Medics that can otherwise run rampant in your territory. One excellent way to get easy stabs is to use your team’s own Sentry Guns as distractions.