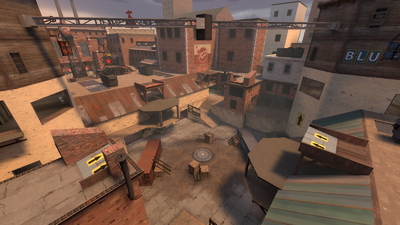 This article is about Community PASS Time strategy.

This gamemode is best suited for the Scout. His stock speed makes him incredibly valuable to the team for scoring. Each team should have at least one Scout (more Scouts working together allows quick passing of the JACK for faster scoring). He can use the side of the map through small corridors or tops of roofs to avoid any dangers. His weakness is his health as many Engineers put their Sentry Guns at the end of the map, he also suffers from the shortest throwing range in the game.

Soldier, alongside Heavy, is the best at assisting the JACK carrier. This especially applies when the class holding the JACK is of the weak nature, like a Scout or Medic. Additionally, due to ability to rocket jump, he has a really good mobility in this mode. It's the best to pair the rocket jumping with jump pads, to achieve really high jumps, sometimes when done correctly the player can be shot across the map. Soldier is also a good scoring class, rocket jumping and intercepting the ball in mid-air is a really good strategy, and can lead to some scoring combination plays when done correctly near the goal.

Pyro is the third class, after Soldier and Heavy, to assist the JACK holder. With a greater base speed than the other two classes, an overrunning attack mode, and the ability to deflect projectiles, Pyro is a good protecting class for the JACK carrier.

Demoman, in most cases, is only deployed to destroy the enemy's sentry nest, or to protect the JACK. Demoknight can be also good at stealing the ball, since after attacking the enemy holding the JACK with melee, the JACK is stolen. His Demoknight variant can be then a really good "Steal and Pass" class.

Heavy is a good class to assist the JACK holder. Because of his power, he in most cases is really good to fend off enemies from the JACK holder, and allow the holder to score. Due to the ability to run as fast as the fastest-running teammate near the JACK holder, his speed can be even the same as Scout's speed near the holder, making him much more deadly. Pairing him with Medic will ensure his survival even more. He also has the longest throwing range in the game allowing him to take shots from farther away.

Usually a class that can both act defensively and offensively, the Engineer mostly sets up a Sentry Gun near the goal. Depending on the map, the sentry can be setup further or closer to the goal.

Mainly a good class to heal a pack near the JACK holder. His role is really important as always; pairing him with a strong class like Soldier or Heavy can ensure the team victory. Despite this, he is deployed rarely, unfortunately, as in most cases having a few Scouts passing the ball to each other can compensate for not having an active healer.

Sniper is most cases a good area denial class. Due to the nature and the wide-open space of PASS Time maps, Sniper in most cases can camp on roofs and important choke points, like goal areas, to deny any enemy from entering.

Spy is a class usually deployed depending on how the other team plays. An early priority for a Spy is to detect and interfere with the construction of any Engineer nest in the enemy goal area. If the enemy team does not actively guard their goal, a Spy can hang around the enemy goal using Cloak and Dagger and uncloak to receive a long pass from a teammate.