From here, the basement defender can see enemies coming from both entrances.

The following locations should be considered when constructing a Sentry Gun:

This strategy is rather simple to execute and very efficient to enforce. It comprises building a Sentry Gun on top of or directly next to the Intelligence briefcase, and a Dispenser directly behind the Engineer. A Teleporter exit should be placed in the Intelligence room as well, so that teammates can speedily access it (to support the Engineer). The Engineer will sit on the table between his Sentry Gun and his Dispenser and simply wait for an enemy to enter the room.

The ideal placement of Buildings for this strategy is: having the Dispenser to the side of the desk nearest the window but with space behind for the Engineer to stand, and having the Sentry Gun be positioned to cover both entrances and as much of the room as possible. The Engineer can then sit in the Sentry Gun nest with his back covered.

The most common methods for fighting against this form of Engineer-stacking defense are:

If you are having trouble dealing with enemies using this method, one tactic is to fire at enemies from the hallways that lead to the Basement with either your Shotgun or Pistol. Once an enemy spots you, run quickly back to the Intelligence room, as if you were fleeing in fear. By doing this, you may lure an unsuspecting player into hunting you to the Intelligence room, and having the player meet his demise in the form of your Sentry Gun. Be careful when deceiving them as you may be killed anyway if you are not particularly agile.

If the opposing team is abusing the Sewers of your team, you can stop them quite easily.

First build a Sentry Gun in the water-filled moat directly under the bridge or in one of the corners which are closest to the enemy side of the Sewers. This is quite useful for you (and your team), both for scoring easy kills and playing mind games with your opponents. This works especially well for the BLU team as their buildings blend in slightly with the water. However make sure that you are not found by an enemy whilst erecting your Sentry Gun, for you are an especially easy target for during this time. Engineers will often abstain from upgrading their Sentry Gun to level 3 as long as possible in the water, as the rocket module has just enough height to poke above the surface of the moat, grabbing the attention of Soldiers, Snipers, and Demomen.

The best Sentry Gun placement by far is underneath the bridge at the entrance to the pipes for the enemy team. This is extremely efficient and effective at gaining kills and restrictions. By placing the Sentry there, upgrading it to level 3 and letting it simply run by itself will block off access for the enemy team to either pipe, kill anyone on the enemy team who is in the water and most importantly, let your team abuse the sewer line, something which the enemy often doesn't have time to counter, as most pushes are done on the bridge and in the battlements.

Forward Base in the Water

Build a Teleporter exit in the small room that connects the sewers to the stairway leading up into the enemy base. This area can then be controlled by building a Dispenser (usually at the bottom of the stairs) and a Sentry Gun. This forward Teleporter allows newly-spawned players to quickly proceed deep into the enemy base without having to fight their way over the bridge or through the sewers.

The largest downside of this strategy is that all of your buildings may be taken down with ease by a skillful Soldier, Demoman, or a small group of enemies who are working together. One way to help prevent your base from being destroyed with ease is to have an Engineer place a Sentry Gun in the water under the bridge. As it is underwater, enemies will not notice it at first and will therefore be harder to attack. If you have some teammates in the sewers with you helping defend your buildings and hold the territory, then your base will be very hard to take down short of an enemy ÜberCharge.

Forward Base in the Enemy Front Door 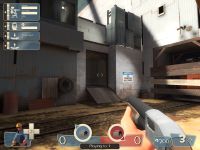 Build in that doorway

Build a Dispenser and a Sentry Gun in the right-side entrance of the enemy base. For maximum effect, there should be two Engineers there to keep the Sentry Gun intact, and one or two Pyros to root out Spies who come to sabotage the operation. This surprisingly defensible position makes it difficult for enemies to enter and exit their base. The common configuration is to place the Dispenser in the corner of the room, sandwiching the Engineers between it and the Sentry Gun. However, this plan is rather quickly defeated by a single Demoman laying eight Sticky bombs into the area via the grate room. From there, he can lay the Sticky bombs with impunity, and detonate them, possible destroying the entire base and getting a few kills in a single blow.

Place your Sentry Gun against the Intelligence, either on top of it, or in the corner against the glass. This way, when enemy Soldiers, Heavies, and Demomen come around the corner, they immediately get shot and back away. After the enemy has retreated and cannot see you, immediately go into the alternative corridor and flank the opponent. This also works well with a Medic and Medic buddy pair; flank the pair while they are concentrating on trying to take down your Sentry Gun, kill the Medic and retreat back to your Sentry Gun to repair it. The short corridors in the basement are perfect for trapping your opponents between your Sentry Gun and your weapons fire, and as such this can be a very deadly form of attack for an Engineer. 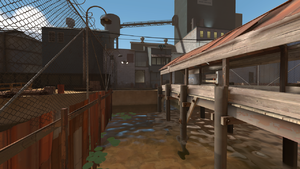 Good places to use invulnerability include:

This will generally only work for the first Intelligence capture of the game. Split your team up into two teams of Scouts. Referred to herein as "Group A" and "Group B".

This will work for keeping your enemies at their base. The appropriate weapon to use here is a Gunslinger with a mini-sentry. Split your team into three teams of Engineers. Referred to herein as "Group A", "Group B", and "Group C".

Snipers can stay at either end of the tunnel, at the top of the stairs, or at the Sentry Gun and halt enemy progress. This helps stop people coming into the sewer or people leaving where the Sentry Gun is.

Invading through the Sewers