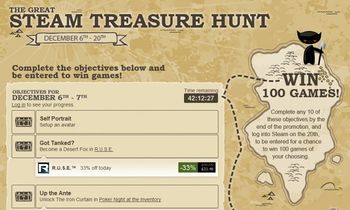 The event page with the objectives for the 6th and 7th of December.

The Great Steam Treasure Hunt was a promotional event that took place between December 6, 2010 and December 20, 2010. Completing 10 of any of the objectives before December 20, and logging in on December 20, gave the player a chance to win 100 games of their choice through a raffle. Every two days during the promotion, 20 players were awarded the top 5 games from their Steam wishlist selected from those players who had cleared any of the 4 current objectives and had at least 10 games in their wishlist.

In addition, exclusive cosmetic items were awarded at various intervals of completion:

New objectives were posted at 10 a.m. PST every two days through the Treasure Hunt. Objectives could be completed from the time they were revealed until the end of the hunt.

On January 11, 2011, 3 winners were announced by name and given the grand prize.