Freight is a Standard Control Point map. It shares many similarities with the map Well, with underwater routes, modified trains, and bases designed for divisions of the RED and BLU teams all being prominent features.

Freight was included in the April 28, 2010 Patch as an official community developed map due to its outstanding quality.

Freight contains one middle point flanked by two buildings, and two symmetrical bases that correspond to either team. There are also two yards, and a final area which contains train tracks.

The central point is located between two train tracks on opposing sides, which mark the end of each team's yard. To the direct left and right of the point are two central buildings with slanted roof areas that players can stand on. This point is bordered by the team's yards, which each contain a separate stair case that is instantly accessible from the base exits, and plateaus into a Sniper deck. The yard also contains a health pack and an ammo pack located behind a concrete block, which can be used for cover.

Control Points 2 & 4 are located in each team's main buildings. The main buildings consist of small corridors and tight spaces. With only two entrances, both being narrow hallways, this is by far the hardest control point to capture on the map, especially if the enemy has a Sentry Gun set up.

These control points are closest to each team's respawn. At round start, they belong to the team closest to it. They are directly outside the respawn and are in between two sets of train tracks. From this area, there are three exits: 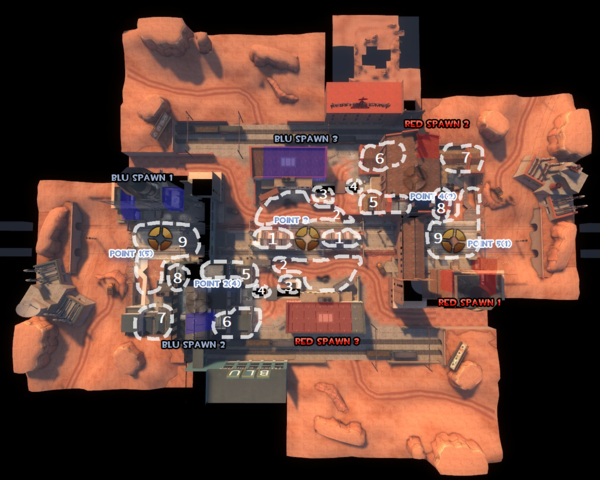