Badlands (King of the Hill)

Badlands (King of the Hill) is an alternate version of Badlands (Control Point) and Badlands (Arena), modified for King of the Hill. It was originally tested in the Team Fortress 2 beta, and then released with the Hatless Update.

Much like the Arena version of Badlands, the first advance spawn is the only active spawn room. However, it has been expanded, with the usual cp_badlands resupply area now being a side room and a larger more elaborate room being the spawn point for the map. A new exit has been added near the center of the main base, leading off from this new room. Also like the Arena version, entry into the main bases is prohibited, the rock spires are fenced off, and there is a water pit underneath the bridge outside the base. The center control point of the Standard Control Point version is the active point of the map. 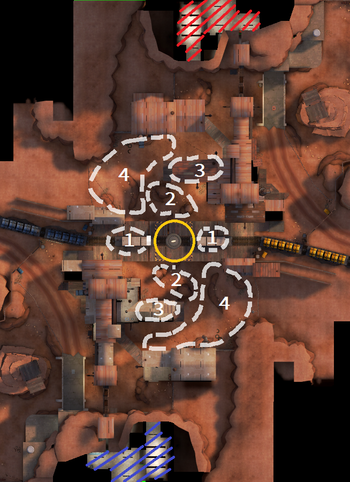