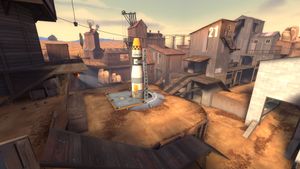 Special Delivery is a game mode introduced with the map Doomsday that was released in the Pyromania Update. The objective for both teams is to take a neutral briefcase to a specified area of the map, while preventing the other team from doing so. It combines elements of Capture the Flag and Payload.

Once the round starts, the neutral briefcase is unobtainable for 45 seconds. Once taken by a member of a team, the briefcase becomes property of that team by switching to that team's color and will emit gold sparkles, small clothing particles, and a long golden trail. If the carrier is killed, the briefcase will be dropped and can only be picked up by the same team. If the opposing team successfully defends it for a duration of 45 seconds, it will return to its original location and become neutral again, allowing either team to take it.

In Carnival of Carnage, the tickets briefcase will automatically be inserted into one of the spectral locks around The World's Largest Strongmann Machine once the platform reaches the top. When the tickets are delivered, all players of both teams are transported to one of three bumper-cars mini games. The team that unlocked the Strongmann will receive a slight advantage over the other. Unlocking the Strongmann does not guarantee victory; the opposing team can still win the mini game and the round.