This article is for content released in the update. For the patch itself, see June 23, 2011 Patch. 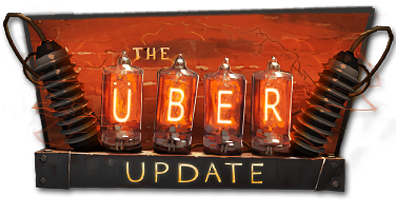 The Über Update was a major content update for Team Fortress 2, which was released on June 23, 2011 Patch. It was heralded as "the biggest, most ambitious update in the history of Team Fortress 2." Similar to other major updates, such as the Sniper vs. Spy Update and the Engineer Update, the Über Update followed a four-day-long system of daily content previews, the last of which featured a new short, Meet the Medic.

Day 1 revealed mob-themed item packs for the Heavy and the Spy, Black Market Business and The Man of Honor, respectively, as well as a new Payload map, Barnblitz.

Day 2 revealed desert-themed item packs for the Sniper and the Demoman, "Lawrence of Australia" and "One Thousand and One Demoknights", respectively. A hidden page, accessed by clicking on a crushed can of Bonk! Atomic Punch, also revealed a Bonk-themed set for the Scout known as "The #1 Fan".

Day 3 revealed two World War II item sets for the Soldier, The General's Formals and Airborne Armaments. Later in the day, a hidden page accessed by clicking on the drawing of the Pyro on a whiteboard revealed a hidden secondary weapon for the Pyro, the Detonator.

Day 4: Meet the Medic and Free to Play Announcement

Day 4 saw the unveiling of Meet the Medic, a new Medic item set called The Clinical Trial, and the announcement that Team Fortress 2 would be Free to Play.

To compensate those who originally purchased Team Fortress 2, a promotional cosmetic item was awarded to all who had bought the game before it became Free to Play.

Day 5 was a blog post following the update.[1] It announced the availability of the Meet the Medic and Schadenfreude taunts on the Mann Co. Store; the Limited Edition Meet the Medic Lithograph in the Valve Store, and Über Update-related wallpapers added to the Artwork section of the TF2 website. Day 5 was not featured on the Über Update mini-site.

The update also introduced six Paint Cans which change color depending on the player's team.

This update added the 11 first Strange items to the game that could be obtained through all of the newly-added Crates by opening them with a Key.

The available Crates and items were: