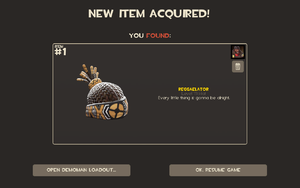 The item drop system is the process of item distribution within Team Fortress 2. It distributes a random item to players on a regular basis until a weekly time-cap is reached.

This system was first introduced with the Sniper vs. Spy Update to change distribution from being dependent upon achievements. Its purpose was to improve accessibility to the expanding quantity of items within the game, while negating the need to achievement farm (meaning to perform out of context actions to gain achievements) or use third-party tools to falsify the obtaining of achievements. However, this system created another way of farming to obtain new items called idling.

As of the July 11, 2013 Patch, the item drop system has changed. Players must now accept new items dropped before proceeding to another item drop, in a move to prevent players from idling.

A graph displaying the relationship between time and number of drops.

A bar chart displaying the distribution of item drops per week.

The current item drop system was introduced on April 20, 2010.[1] Players are guaranteed to find items at regular intervals of 30 to 70 minutes, with an average interval of 50 minutes.

The system has a cap on the amount of playtime in which drops can occur. This cap has been estimated to be 10 hours each week. Playing beyond the cap will not yield additional items[2]. Mann Co. Supply Crates and other usable items drop on a separate timer, meaning that these items do not affect the interval between regular drops.[3][4] The system resets each player's playtime cap every Thursday at approximately 00:00 (midnight) GMT. If a player plays less than the playtime cap in a week, their leftover time will be added to the next week, so a player who does not play for one week will receive twice as many items the following week. The amount of time a player can save up is capped at double the allotment of a single week (roughly 20 hours).

In order for a player to receive an item drop, they must be "actively playing" i.e they meet all of the following criteria:

The dropped items are stored in the backpack after the player's death, while visiting the Main Menu, after a trade is completed, if the Mann Co. Store is opened, or if ten duels are won. If the player leaves the server after receiving an item, but before storing it in the backpack, a notification will alert the player of the new item(s) when the Main Menu is visited the next time. New item notifications must be dismissed before any further new items can be found. Occasionally, dropped, traded, or crafted items may get stuck "in limbo" and may not immediately appear in the player's backpack. This may occur on instant respawn servers blocking the "New Item Found!" screen pop-up. Visiting the Mann. Co. Store, pressing Esc. to bring up the menu, or disconnecting from the server will usually restore these items to the player's backpack.

While it has always been perceived that each weapon has an equal chance of being dropped to the player, it appears that certain weapons that form part of an item set will drop more or less often than others. It is not known exactly which of these weapons are rarer or more common.[6]

Under the Free-To-Play system introduced in the Über Update, free players receive only limited item drops (with no rare or cosmetic items) until they upgrade to Premium status, upon which they gain access to the full item drop system.[7]

A positive aspect of the system is that it allows new and old players alike to earn unlockable weapons by investing playtime. It allows players to play as any class, since as long as they are racking up gametime the player is eligible for an item drop.

However, many players receive unwanted duplicates. This issue was eventually resolved by the introduction of the crafting system, and later by the trading system, allowing players to respectively craft and trade many of the available items (with some exceptions) with each other.[8]

On April 29, 2008, Valve unveiled a set of three unlockable weapons as part of the Gold Rush Update. These weapons were unlocked by completing a set number of achievements, which completed an Achievement Milestone. There were three Achievement Milestones in all, with each successive one requiring more achievements. Once a milestone was unlocked, the player received the individual set weapon that came with that milestone. This requirement was later lowered to reduce players from grinding achievements just to get the new unlocks.

On May 21, 2009, Valve implemented a new system of random drops for unlockable items, and originally discontinued the milestone system. Valve soon fell back to the Achievement Milestones, now coupled with the item drop system, for the Sniper and Spy weapons in the May 29, 2009 Patch. This milestone system has since been used in the WAR! Update as well as in The Engineer Update. 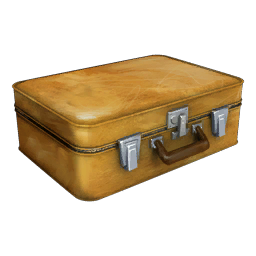 The backpack icon used before the Mann-Conomy Update.

While keeping the Achievement Milestones already present for the Scout, Pyro, Heavy, and Medic, Valve implemented the random drop system to maintain class balance in the event of a class update. This system was patched into the game as part of The Sniper vs. Spy Update on May 21, 2009.

Valve calculated the average time a regular Team Fortress 2 player played, then came up with a standard time which was used as a marker or set point. Every 25 minutes of gameplay, the game calculated a random number to determine whether the player would receive a weapon. If the player was lucky (25% per item chance), then they would find a randomly chosen item. If the player was unlucky (75% chance), then they would receive nothing and the timer would reset. In addition, there was a separate timer which ran on a 15,430 second (4 hours, 17 minutes, and 10 seconds) interval which gave an additional 1 in 28 chance of receiving a hat. The average time for finding a single item was 1 hour and 40 minutes (including duplicates). Since weapons were granted via a random number generator, experiences varied.

When first released, item drops would only occur if players were connected to the Steam Community. If the player was not signed into their friends list, or if Valve was performing maintenance on the Steam Community, the player would not receive any item drops during that time. Additionally, if a player was connected to a server that had lost connection to Steam, item drops would not occur until the server reestablished its connection.

The old system resulted in unlucky streaks for some players where no items were found for long periods of time. The current system has removed this possibility and increased the rate at which items drop.

On December 22, 2010, Valve announced that the item drop rate would double between December 23, 2010 and December 30, 2010. All players during that period were also awarded a Stocking Stuffer Key.[9]