Precipice is a community-made Payload map released during the Scream Fortress 2019 update that takes place between secret bases in abandoned mills built along the edge of a chasm.

BLU must push a minecart carrying a bubbling witch's cauldron of potion catalyst through the map to dump in the Pool of Souls defended by RED. When the cauldron boils over along the way, watch out!

The map is noted for having a more than usual number of chokes along narrow, relatively straight routes, a couple being particularly strong at Points A and D, both requiring exceptionally coordinated team play to defeat any sort of organized defense.

Precipice was contributed to the Steam Workshop.

The cauldron on the Cart contains a brew that sloshes as players capture it. At the start of the round, the content of the cauldron only steams and simmers. After about 15 seconds it starts to boil, and the cauldron starts to bubble over after an additional 15 seconds. After another thirty seconds, for a total of a minute, the cauldron pops off one or more spell effects. These include a large, but brittle, BLU-allied Skeleton that is summoned from the earth on BLU's side of the cauldron, a small random number of BLU Normal Skeletons that jump out of the cauldron, and a "tornado" that can shield pushers from explosions. The cauldron also has a chance to buff healing, either through supercharged healing beams, or a direct three times buff in cart healing rate. Additionally, one to three Magic Spells could spawn around the cauldron. Any combination of these effects can happen at the same time. When any of these effects occur, the cauldron simmers down, resetting the effect timer. This event is also triggered when either of the first two points are captured.

Note: If you're having trouble finding the locations listed here, you can scroll down to the Helpful overview section to see their exact position marked on the map.

The BLU team starts at their headquarters with the Payload, with the first checkpoint right around the corner from where they start.

RED initially respawns at the neutral spawn about halfway along the map with two gates, one a shortcut to the first point. Capturing the first point closes that short route.

Checkpoint B is located running parallel to a series of hallways, with the cliff edge running on its other side.

Capturing the second point moves RED respawn to their final base and moves BLU respawn to Point A.

Checkpoint C is located tightly within a tunnel. At the end of this tunnel is a hallway, and to the outside is a path running parallel.

The final checkpoint lies behind two main pushes. The first one requires teams to push through the gates of an open shipping yard, where cover is plentiful and some minimal flanking is available. The second one opens up into a center surrounded by a building, where numerous hallways and vantage points allow the cart to be seen from just about every angle. 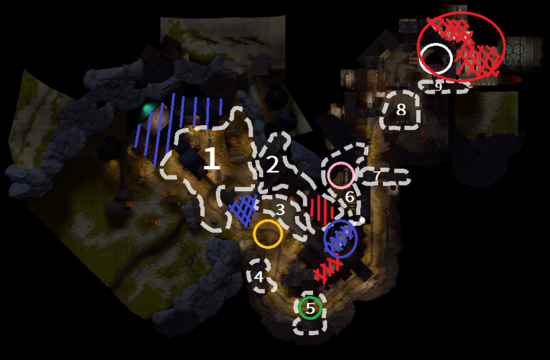