Borneo is a community-made single-stage Jungle-themed Payload map. It was included in the Gun Mettle Update.

A portion of the money made from sales of Gun Mettle Campaign Pass for the Gun Mettle campaign goes to the authors of this map.

The cart starts outside the BLU Spawn and runs past a small shed, and underneath a raised catwalk near a small house. From there, it'll go through a maintenance building.

From the other side of the Maintenance area, the cart will move forward towards a left turn by a grey color structure. Once turned, it will climb up a small wooden bridge over a ditch to the checkpoint in front of a concrete tunnel through a hill.

Past the tunnel, the cart will arrive in a large open area and head forward towards a large garage structure where checkpoint 3 is held. Along the way is a resupply room for both teams.

From the garage, it is a straight path to the cart target: a hatch in the RED Base down into a pit full of explosive barrels. Along the left side are a few smaller structures with supplies. 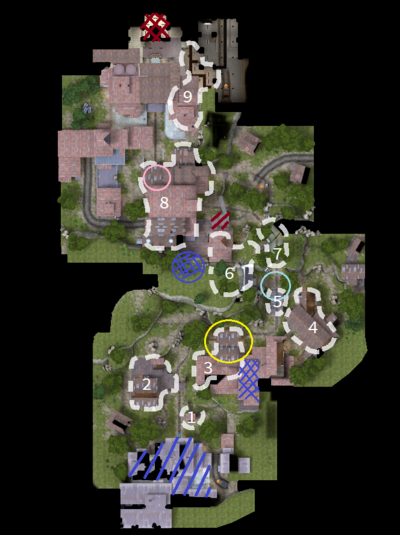 For this update we redid a lot of the map. Basically, we opened up a lot of the areas because it was too restrictive before. We also made many areas more interesting, by adding highground, more routes, etc. It's pretty much a different map than it was before.

Here's a general description of the changes: