From Team Fortress Wiki
Jump to: navigation, search
Eyeaduct has multiple variations, including King of the Hill.

Eyeaduct is an official King of the Hill map, released as part of the Very Scary Halloween Special on October 27, 2011. Similar to Ghost Fort and Mann Manor, Eyeduct has spawning Soul Gargoyles, pumpkin bombs, and a boss. 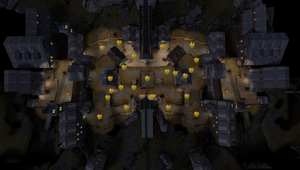 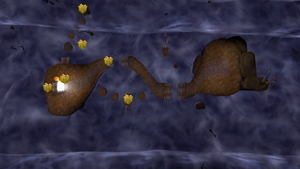 Overview of the underworld, with gifts. (Large file)

Similar to the previous year's Halloween event map, Mann Manor, Eyeaduct has spawning Soul Gargoyles, pumpkin bombs, and a boss. It also includes the haunting ghosts of 2009's Halloween event map, Harvest Event. The ghosts will not appear until the point has been captured by one of the teams. The boss will appear only while 10 people are playing.

MONOCULUS haunts this map much the same way that Horseless Headless Horsemann haunts Mann Manor; he will spawn on a Control point, roam the map, and attack players and buildings of either team. He may arrive at any phase after "waiting for players" mode, including before the activation of the control point and during humiliation.

Eyeaduct features an Underworld, which is usually only reachable through portals that are created when MONOCULUS teleports or is killed. When MONOCULUS teleports, he leaves behind a purple portal, which has considerable attractive force and remains active for a few seconds. If players get close enough to the portal before it closes, they are restored to full health and transported to one end of a chain of small islands named Purgatory. Players on the islands suffer a health drain similar to bleeding, which continues as long as they remain there, and increases in damage with time. Teleporters and other buildings cannot be placed in the Underworld.

At the far end of the islands is a glowing white portal back into the map. Players must jump, be knocked back, or be airblasted by an enemy to reach the portal, as falling into the waters of the Underworld will cause the player to die. Stepping into the white portal instantly teleports the player back into the main map, and grants invulnerability, a 200% overheal, a speed boost, and a crit boost for a limited time.

When MONOCULUS is killed, he leaves behind a floating Bombinomicon. Players who enter the Bombinomicon are teleported to Loot Island, another section of the Underworld just beyond the regular island, with a small hill leading to a large skull-shaped formation. The normal Underworld health drain is not in effect on Loot Island. Upon entering the formation, players await a cage to descend, allowing them to jump into the Bombinomicon. If a player enters the Bombinomicon, they are teleported back to the map, granted the achievement Dive Into A Good Book, given the Bombinomicon item (if neither have been earned yet), and buffed identically to exiting the Underworld through the white portal. Those who stay behind for too long are engulfed in an explosion that will instantly kill anyone caught in it.

At the start of humiliation, all surviving players not in the Underworld are transported to the same Purgatory islands reached through the purple MONOCULUS portals during normal play. However, some players may materialize near to the white portal rather than in the usual starting location. Members of the losing team can take the white portal back to the main map, but receive no invulnerability or crit boost when they do; the white portal works as usual for the winning team.