Gorge Event is a single-stage 2CP Attack/Defend Control Point map. The first point is on the bridge over the gorge and the second is in the great hall inside Redmond Mann's mansion. Redmond has escaped Hell and has reconnected to his Life Extending Machine — BLU must capture his mansion to send him back.

Gorge Event was contributed to the Steam Workshop.

This Event map has some changes from the original, while most are minor or subtle, a few have significant effects on gameplay and are described in the Locations.

Capturing the first point triggers a Witching Hour. The Game Clock stops and the earth shakes. The clocks on the Tower and over the Great Hall turn green, the clockworks rumble and quickly step the hand from IX to XII and then chime 5 times. A total of 15 Normal Skeletons and the Skeleton King begin to spawn with the shaking. Around the first point, 9 Skeletons spawn in 3 waves of three Normal Skeletons. Around the second point, the Skeleton King spawns and 6 Normal Skeletons spawn in 2 waves of three. As about 50 seconds of time runs out, the Witching Hour ends: the clocks chime once and return to white faces and the Game Clock resumes. The Skeletons remain in play until destroyed. 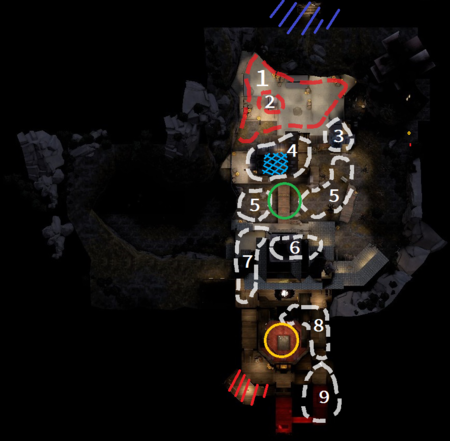