Helltower is a Payload Race map added in the Scream Fortress 2013 Update. Players who own a Spell Book may equip it and be able to pick up and cast the many Magic Spells that appear on this map. Occasionally, the Soul Gargoyle spawns for randomly selected players on the server to find and pick up.

The objective is to push a cart of gravel containing the corpse of the opposing team's employer (Blutarch for RED, Redmond for BLU) to the lift at the high towers before the other team, all while the brothers' spirits shout general insults (announcements) at the players. At the beginning of the round each team's employer requests or demands that the team send their corpse (the other team's employer) to Hell. Once either brother is pushed to the checkpoint, all players are sent to Hell.

In Hell, the teams spawn on opposite sides of a ruined tower and must make their way to the spellbook on Skull Island while avoiding enemy fire and spells and falling into the lava. Any player killed in Hell becomes a Ghost and can pursue the living players; however, ghosts have no way to deal any damage. Pressing primary-fire or using a voice command as a ghost causes the player to yell "BOO", which can be used to annoy living players but serves little other purpose. Players that survive and reach the book receive an Unfilled Fancy Spellbook, if they do not already possess one in their backpack, which must be filled with Spellbook Pages in order to become usable.

During each witching hour, many Magic Spells spawn all over the open areas of the map and two Bridges open over the Lava pit to the Cliff House. Players who survived the bridge crossing may pick up the Rare Magic Spell at the Cliff House and be returned instantly to their own spawn with an Overheal and a brief speed boost.

At the start of the second Witching Hour and every second hour after that, the Green Skeleton King and 5 Skeletons appear and begin chasing the nearest players. 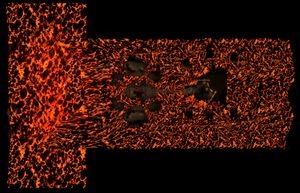 Overview of the Hell part of the map.

The Mann Brothers, Redmond and Blutarch, serve as Helltower's Halloween-themed Payload carts. After being slain by their long-lost brother Gray Mann, the ghosts of the Mann Brothers endeavour to have their respective mercenaries send the other brother to Hell so that one may claim their father's inheritance, as described in Grave Matters. Thus, each team must push the corpse of the other team's boss to Hell while the ghosts of their respective employers bicker, report progress, and give instruction in place of the Administrator. Voice responses spoken by them are typically made in response to progression of the game, including environmental factors such as spells or newly spawned enemies.

While the initial push to the end works like a regular Payload race on Hightower, once a team has pushed their corpse to the end, the screen flashes white as all players are transported to what is believed to be Hell.

On first arrival, all players appear on separate sides of a small area surrounded by lava (along with a short dance-off). The team that successfully pushed their cart to the end receive a noticeable Overheal buff as both teams are to fight over winning a prize upon Skull Island; an Unfilled Fancy Spellbook.

At this point, the game turns into a short Arena match, with no respawns. Instead, killed players turn into maneuverable ghosts. The team that manages to make it to Skull Island and lower the gate around the book wins the match, even if they lost the Payload race. 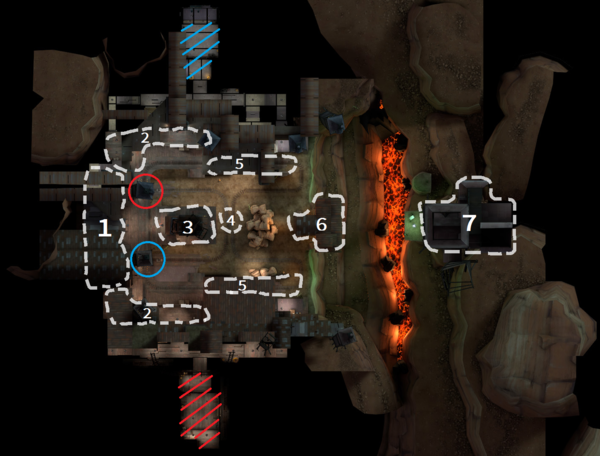