Megalo is a community-made Halloween-themed asymmetrical King of the Hill map, featuring a Haunted Ghost Train, added in the Scream Fortress 2020 update.

Megalo was contributed to the Steam Workshop.

The center platform has three tracks crossing it, one for each of three levels, and it raises and lowers periodically. There is a bottomless pit below the point that kills any player that falls in. The platform starts at the bottom level, then raises to the middle one, then to the top one, then lowers back to the bottom one, then repeating this cycle. Once raised or lowered, the Ghost Train passes through using the level selected by the platform, but always arriving from the same direction on each level.

The Ghost Train's schedule varies from about 20 to 60 seconds between each run. On the middle and top tracks, clanging bells and flashing lights warn of the passing Ghost Train, but these warnings are not given on the lower level. The Ghost Train (or the map) also emits the nominal Ghost moans and the occasional Zephania "Boo!" whenever the Ghost Train makes a run, but these ghastly sounds can be difficult to hear over the bell and Train noises (the moans are clearer to Spectators below the map level).

Note: if you're having trouble with finding the locations listed here, you can scroll down to the Helpful overview section to see there exact position marked on the map. 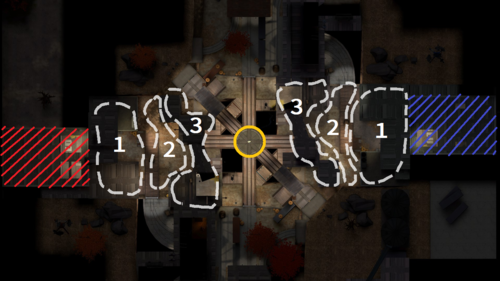 All of the posters on the map are "haunted" versions of the regular companies, posters, and products.