Brickyard (previously Warehouse) is an official PASS Time map created by Valve in conjunction with Escalation Studios, released in the August 18, 2015 Patch. As with every other PASS Time map, it contains three goals for each team — one shoot-in goal, one walk-in goal, and a bonus goal.

The map takes place in a city warehouse district with speed boosts and jump pads scattered around. 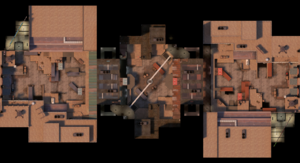