HAARP is an Attack/Defend Capture the Flag map created as an entry for the TF2Maps.net A/D CTF and Payload Race Contest. It won first place in the Attack/Defend CTF category.

The map is divided into three stages; in each stage, BLU must deliver their intelligence to two control points while RED defends. The intelligence spawns outside of BLU spawn, where it can be picked up. 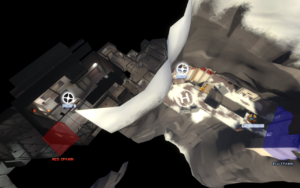 The capture point is just inside RED's base, accessible either by going straight out of BLU spawn outdoors, or heading to the right into enclosed hallways. The area itself is a mix of interior rooms and a platform on the side of a high cliff.

Capture Point 2 is just outside RED's spawn deep inside RED's base. The point itself is inside of a small room with a windowed wall facing out into a large, warehouse-like structure. 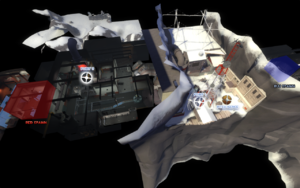 Stage B's first capture point is located in a small wooden shack underneath a radio antenna. Both structures, along with another small shack, are located atop a rocky plateau that BLU must reach.

Stage B's second capture point sits at the end of a long, trench-like path inside of a building. The actual point sits underneath a large glass structure; the path is surrounded on either side by platforms. RED's spawn is located just up a set of stairs from the point. 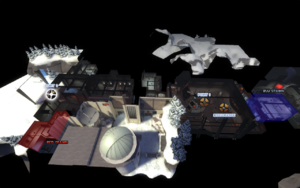 Stage C's first capture point is located inside a small, roofless area overlooking BLU's spawn and made to resemble a security or control room. On one side, stairs lead up to a narrow path that leads to the capture point. On the other side, a wide path leads to a similar spot.

HAARP's final capture point is located at a desk in an office at the far end of a large open room. RED spawns are located on either side of the point and a lone wall offers the only cover in the open area. There are two entrances for BLU to enter, one directly across from the capture point room and the other directly to the side of the first entrance.