From Team Fortress Wiki
(Redirected from King Of The Hill)
Jump to: navigation, search 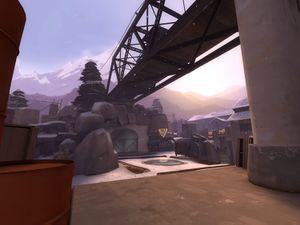 The hill on Viaduct.

King of the Hill is a game mode similar to Arena in its simplicity. King of the Hill focuses on a single control point at the center of the map, which is neutral and locked at the beginning of the round. Teams must make their way to the control point and capture it when it becomes available. Once the point is captured by a team, their team clock will start a three minute countdown (seven for Ghost Fort). If the enemy team manages to capture the point back, their clock will start counting down while the other team's clock freezes at the time the point was recaptured. A team wins once they own the point and their clock runs down to zero. If a team's time elapses but the other team is in the middle of capturing the control point, Overtime occurs; the first team must fully reverse the capture (or, if it is overtaken, recapture it) to win.

King of the Hill maps

King of the Hill maps carry the koth_ prefix; community maps are identified with italic font.