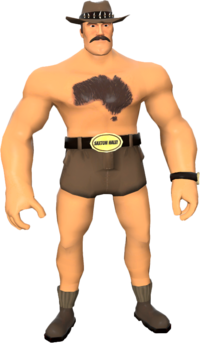 Saxton Hale as he appears in the mod.

The VS Saxton Hale Mode is an unofficial "Juggernaut" variation of Arena Mode, in which an entire team of mercenaries is pitted against one player in a battle to the death. Whilst the primary rules of kill or be killed still apply, the modification involves the lone player taking on the role of an overpowered Saxton Hale (or other "boss" character), contending against the rest of the players as the other team until either the boss or all of the mercenaries die. Occasionally the teams may switch, to allow the team-colored models for Vagineer and Christian Brutal Sniper to appear and to generally vary things a bit.

The mod was created by Dr. Eggman and Random Fortress community in October 2010. Some updates (August/September 2010) to the mod were done in collaboration with FlaminSarge. Later, in July 2014, Chdata took over main development of the game mode and has opened to contributions via Github. Saxton Hale is voiced by Dreux "Druox" Ferrano Jr. Usually the maps these games take place on are VSH_ (Versus Saxton Hale) maps.

Note: Gameplay may change accordingly across different servers, due to the main VS Saxton Hale plugin being an open source project for anyone to fork their own edits to their liking. This page only covers the default version of the game mode and thus may be different from edited versions of the game mode.

Because the game mode is based on Arena, dead players cannot Respawn until the next round starts. The boss is usually restricted to using melee swings or Mantread stomps but is granted with a very large health pool. Most bosses default to a +210% damage increase, giving 3.1x the base damage of 65, allowing them to hit 202 (rounded from 201.5, which is still used for internal math checks in the game). This damage allows them to one hit kill most classes, except for Heavy who starts with 300hp by default and other classes like Soldier if they are overhealed enough to overcome the boss's damage. This can vary if the server enables damage spread and random Crits.

A control point on the map will either enable after a certain elapsed time, or when the number of RED team players has dropped to a certain amount, depending on the server's settings. At this point, either team is able to capture the control point and win the round.

In order to reward risky close-range combat with the boss, all melee weapons (excluding the Spy's melee weapons and Market Gardener) are given a constant Crit boost. Many actions that would instantly kill a normal player, such as a backstab or a Taunt kill, will only deal a large amount of damage to the boss rather than killing him outright.

Backstabs in this case, have a formula that scales how much damage is dealt based on the boss's max health. In 1 versus 1 or 1 versus 2 scenario, backstabs can hit for around 60% of the boss's health. Granted, it tends to be much harder to pull one off when the boss has less players dividing his attention. In a 1 versus 31 scenario, backstabs will hit about 10% of the boss's health. The boss itself gains a slight resistance to backstabs for every backstab it receives, reducing the damage of the next backstab from any player.

Unless bosses other than Saxton Hale are disabled by the server, the boss player has a chance to become one of the various different boss characters from the game mode; most of these alternate bosses are varieties of internet memes or fads. Whilst several exclusive skins appear on specific servers (such as the Demopan), the core version of the mod includes a playable Horseless Headless Horsemann Junior (a smaller, player-sized HHH), the Vagineer, the Christian Brutal Sniper and the Easter Bunny, a completely original character. Meanwhile, other bosses have been created and developed based on Internet celebrities (mostly memes), Valve characters (such as those from Portal), other TF2 NPCs (TF2 Announcer) and more.

versus Saxton Hale's boss selection is weighted to select Saxton Hale the majority of the time, or roll a dice that will equally select from the other bosses.

In order to provide balance for the greatly outnumbered boss, several abilities are available to the boss player. These include:

The bosses' initial health increases based on the number of players taking part in the game. This health is calculated as the nearest integer to [(760.8+n)×(n-1)]1.0341 + 2046, where n is the initial number of players on the non-boss team and 2046 is the base health.

Saxton Hale (and other bosses) Health

Some weapons equipped by Mercenaries will be changed into their default counterparts or edited for balance issues:

Remember, however, that balance specifics and mechanics may vary from server to server as some of these settings are adjustable via server console Variables or may be edited.

- IMPORTANT: I realize this may make arena_nucleus terrible. On my server I made it teleport hale to spawn like HHH on only this map, but I didn't feel like setting up a config file for this to release publicly yet.

- This prevents Hale from being pushed back in vents or in the giant Scorch Shot in the new 2fortdesk map.